And on to my project… 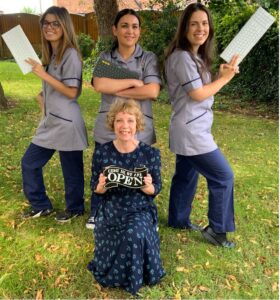 In applying for a Topol Fellowship, I wanted to address two of the big problems I faced when the pandemic struck.

First, when Covid temporarily closed the Practice doors, I worried about how I would continue to see my patients, particularly those with long-term chronic conditions? Secondly, how could I continue to help Student Nurses experience the fantastic world of Practice Nursing? It was clear that the old ways of working were redundant but were there new, different ways?

Resilience was the word of the day, or should I say, the next 18 months!

Every day, and in every area, it seemed that people were keeping in-touch using video-based technology. What surprised me was that no-one appeared to be discussing this as a potential solution to the continuation of patient care.

I decided to investigate further.

Now I’m not sure if this is the same for everyone, but when addressed with a big challenge my first port of call is to be totally overwhelmed by the many reasons it is insurmountable. In considering whether video consultations could help, there was a lot to think about. Would patients buy into it? Did we have the technology? Could I get the support of my Practice Team and my peers? And that was just my starter for ten.

My biggest barrier was much closer to home… could I lead a project to make this happen?

In any group of colleagues, I was always the quiet, dependable one – the one who got on with her work and who hoped for a quiet life. I certainly wasn’t a leader, an innovator, a disruptor. And as far as my experience with technology, my 15-year-old son fell about in laughter when I told him I was considering ‘going digital!’

My demons were telling me not to even try but my mind was insistent that something had to be done, and I had to do it!

So, my journey into video clinics began. Or should I say, “Video Group Consultations.”

Before Covid-19 was a part of life, I had been working with a group of like-minded peers from around the country to explore the benefits of group consultations. My idea, my project, was to take this group approach where patients with similar conditions, or issues, could meet with a health-care practitioner, to share learning and experiences, with the twist that they would be virtual experiences.

The idea sounded simple, even the biggest technophobes were Zooming and TikTokking, but before I could even face the unholy trilogy of mute, camera, and streaming, came the deafening crack of negativity from the Practice Reception Team who loudly professed “It’ll never work here!” The Practice Manager and GPs had been easy to convince, but this could be difficult.

I thought long-and-hard on this and decided to try involving the most vocal opponent of the Reception Team as a member of my Implementation Team. Upon reflection, through all the ups and downs, this was probably the single best decision I made, because, within days, she became a powerful advocate for the change. Since these early days she has gone on to be appointed as group facilitator and is integral to our continuing success.

In addition to bringing this person on-board, I managed to get some other key stakeholders to support the project, including NHS England/Improvement, and brought in technical expertise from an external team of digital specialists. With our project team together and ready to go, the next challenge was to visualise how video group consultations would work in real life.

The solution was simple – rope in some ‘willing’ family members into a series of trials. In this safe environment we would work out the flow, the ‘rules’ of engagement, what worked and importantly, what didn’t. They helped us to experience the process and instilled confidence that we were on the right track.

Now, do you remember that my second challenge, was to raise the prospect of General Practice Nursing as a viable career option to student nurses? This was always on my mind. I got in touch with local universities and with their help, I was able to bring in three second-year students who were interested in my challenge. When I say, ‘interested’, I really mean, confused but intrigued – but this was a good thing!

Rather than teaching or coaching the students I really wanted them to bring forward their different life experiences and talents, to influence the success of the project. And they did. They quickly engaged and where many saw problems, they saw opportunities. They took on the challenge to tell our story, and to engage with patient groups, using social media, and went on to develop a playbook of what works well, and where the pitfalls are, which could be shared with others who may be interested in running Video Group Consultations (VGC).

And so we advertised and the day came when the patients began to join our first real VGC!